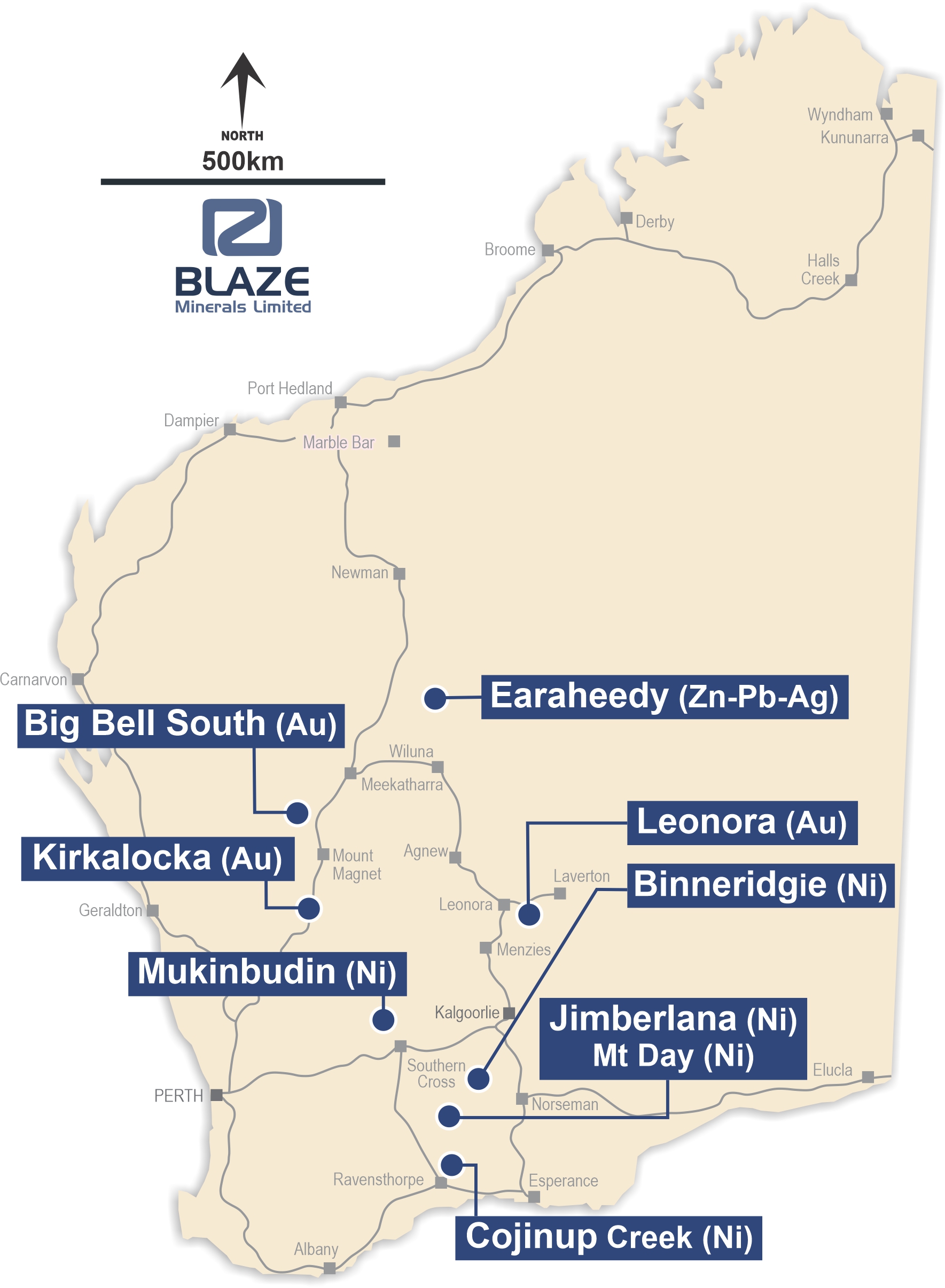 Proterozoic intrusions of the Widgiemooltha Suite include the Jimberlana Norite, the Mt Alexander intrusive system (St George Mining Ltd) and the Binneridgie Dyke. These systems include a variety of lithologies, including voluminous granodiorite, diorite and gabbro intrusions which are intruded into the host structures alongside the nickel-prospective ultramafic rocks. 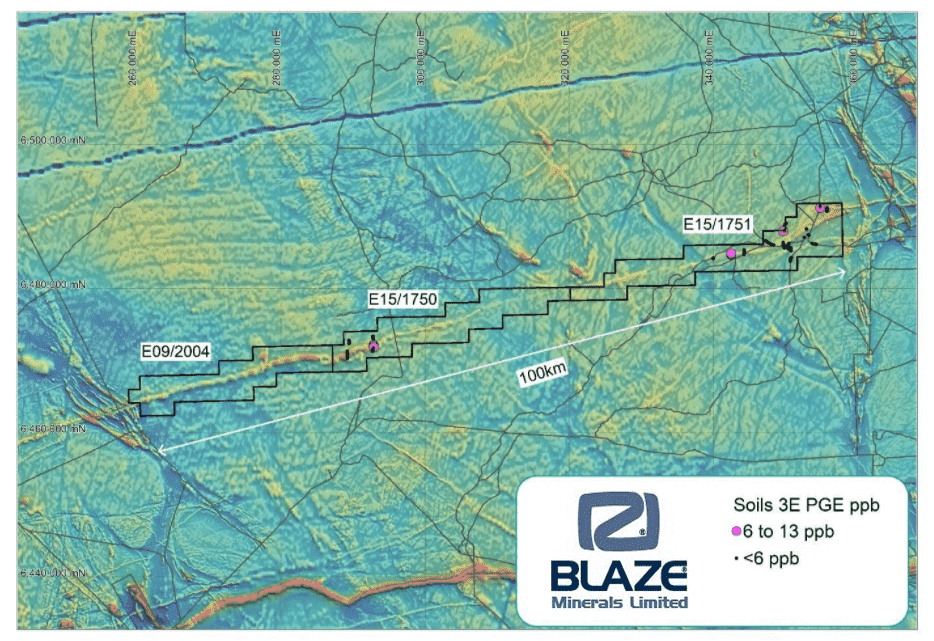 The preliminary imagery is depicted in the images below, with initial interpretation revealing the presence of multiple highly magnetic intrusive features along the one hundred kilometre length of the project.

The Jimberlana Project (E63/2009) was granted in March 2021 for an initial period of five years. The project covers 18 kilometres of strike of the nickel prospective Jimberlana Norite intrusion, a mafic-ultramafic intrusion of the Widgiemooltha Suite which is known to contain significant Ni, Cu and PGE anomalism along ~300km of strike.

The Company is exploring the Jimberlana tenement for large tonnage, disseminated style mineralisation within ultramafic portions of the intrusion.

The company has received Au, Pt and Pd assay results for these end of hole samples, which confirm the rocks are prospective for Ni-Cu-PGE sulphides.

The company has completed a further 625 sample soil sampling program over portions of the intrusion not covered by aeolian sands and alluvium, at a 400m x 100m nominal grid. Soil samples were taken from a coarse 0.96-2.5mm fraction to reduce the influence of the widespread aeolian sand that frustrates exploration within the region.

Rock chip sampling undertaken during the 2020 has identified gabbro, diorite and granodiorite, with moderate levels of Ni, Cu and Co and PGE.

In addition, the Company has recently pegged three new tenement applications within the Forrestania region, to expand the Jimberlana project.

The company is undertaking initial traversing and regional geochemical sampling programmes over the application areas to assess them for Ni-Cu-PGE fertility prior to continuing to grant. 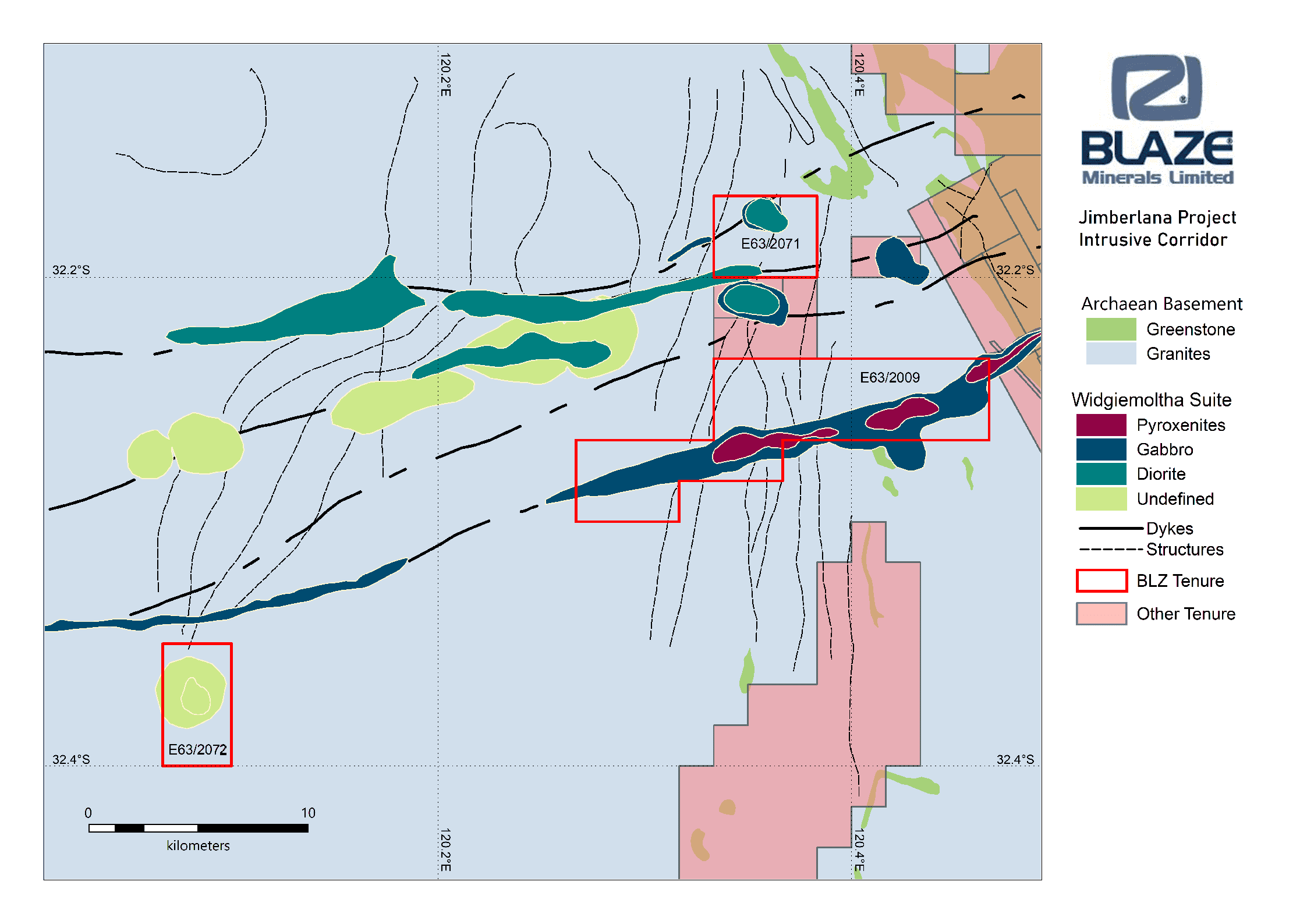 Exploration license application E63/2071 consists of six sub-blocks covering 17.4km2 and is located approximately 8.5 kilometres north of the Jimberlana Norite. The tenement covers a magnetic anomaly approximately 2 kilometres in diameter which has been drilled by two traverses of RAB drill holes in 1997, targeting a gold in calcrete soil anomaly. Drilling intersected a mixture of granite gneiss, interpreted metasediments, mafic and ultramafic rocks. Historic drill hole RTRB27 intersected ultramafic rock with end of hole assay results of 1m @ 0.76% Ni, 860ppm Co and 6,270ppm Cr from 41m. The other drill holes did not return material anomalism in end of hole samples.

The intrusive complex underlying E63/2071 is interpreted to be associated with the Widgiemooltha Suite of rocks and given the end of hole geochemistry, is highly prospective for nickel sulphide mineralisation. No electrical geophysics have been completed over this tenement. 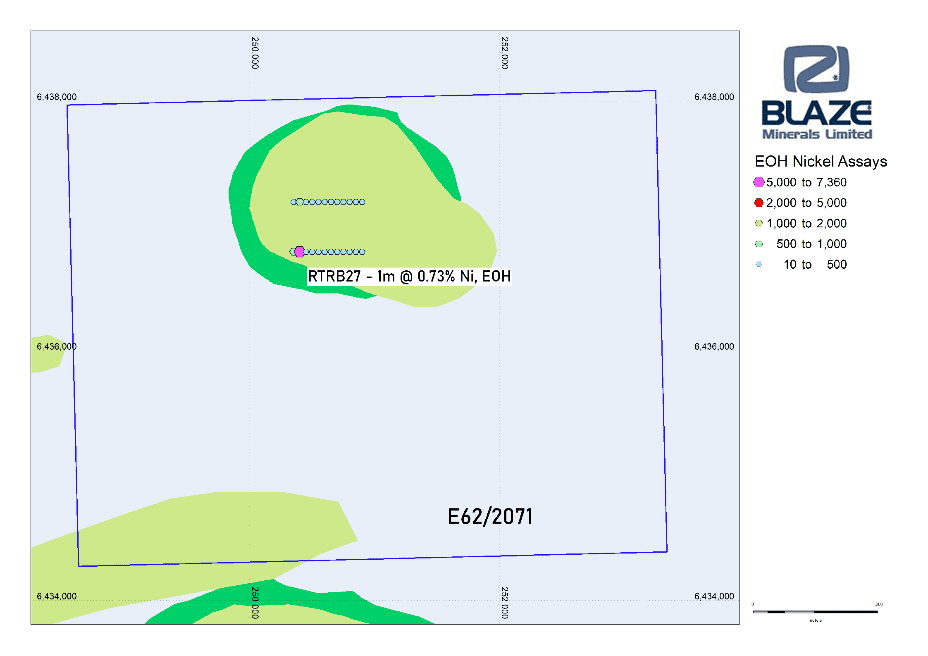 Previous explorers have drilled six RC holes within the tenement, for which no WAMEX records exist. Blaze will requisition the data for these holes while progressing the Application.

The Cojinup Creek Project consists of four exploration license applications (EL74/658, E74/659, E74/660, E74/661) covering a 738km2 area north east of Ravensthorpe, in the southeast of Western Australia. The Company is working toward grant of this tenure.

Results of rock chip assays received from reconnaissance traversing through the project have identified that ultramafic cumulate rocks, notionally peridotite, are present within the dykes and intrusions of the Marnda Moorn Suite, based on a MgO content of 38%.

Nickel contents were moderately elevated within the mafic and high-MgO rocks (c. 100-200ppm), with elevated and anomalous copper present in mafic, intermediate and granodioritic rocks (up to 240ppm Cu).

The Company is encouraged by these results, particularly the identification of highly MgO rich cumulate ultramafic dykes. The presence of anomalous copper within more felsic lithologies is yet to be fully understood, but these may represent hydrothermal remobilisation of nearby nickel-copper-PGE sulphides during the complex, multi-phase intrusive event. 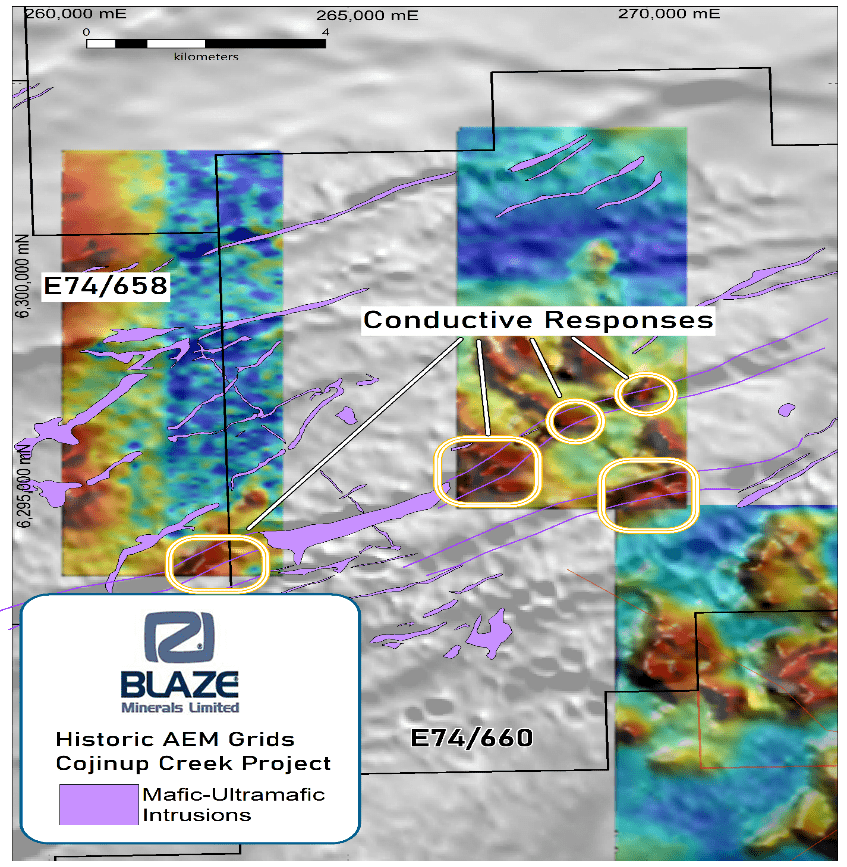 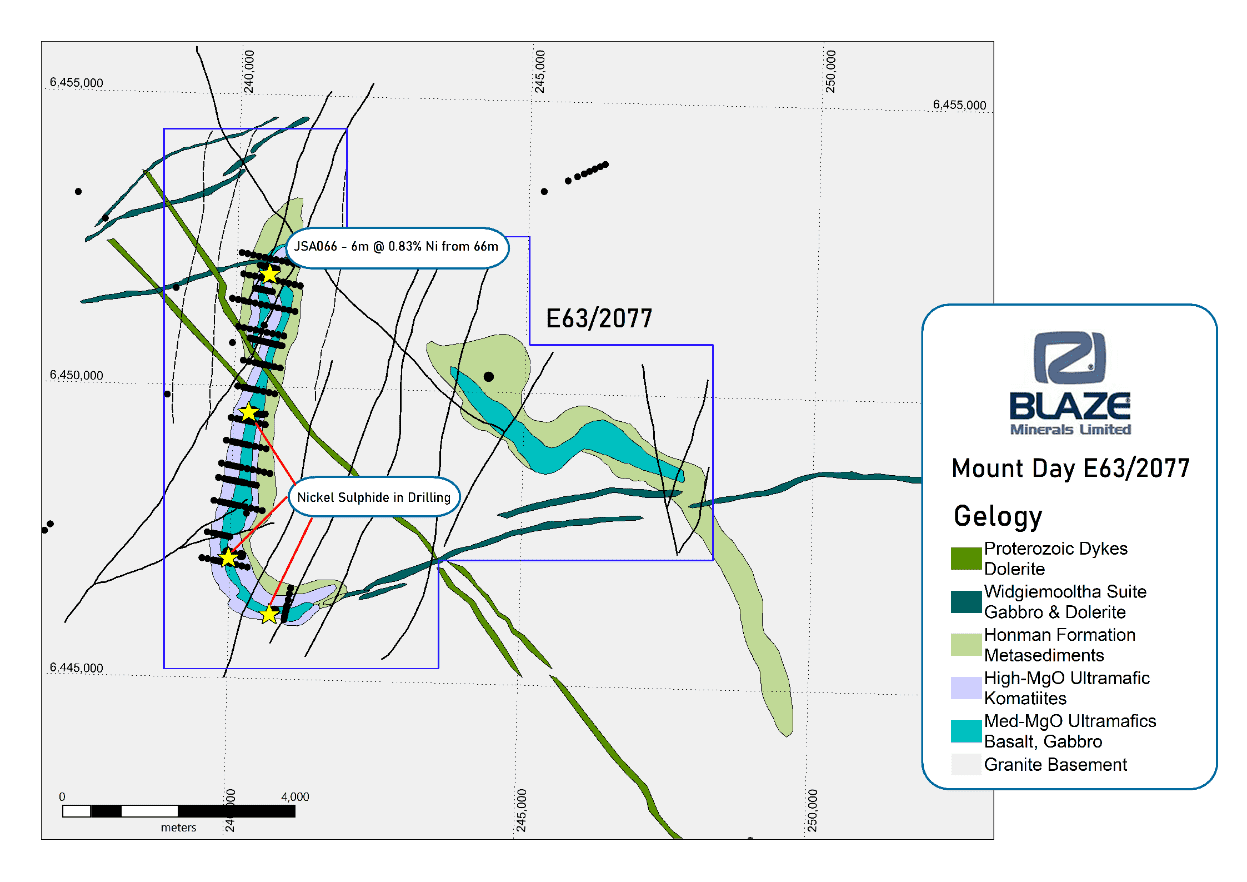 Diamond drill hole JSD001, completed in 1999 in order to test a moving loop EM anomaly, intersected a 1 metre interval from 319 metres down hole which assayed 0.5% Ni, 130ppm Co and 150ppm Cu. This interval was interpreted to represent magmatic sulphide mineralisation.

Aircore drill hole JSA066, completed in 2003 and located towards the northern end of the tenement next to a Proterozoic dyke, intersected 7 metres of disseminated pyrite and violarite from 65 metres down hole. The intersection was hosted in talc schist and returned an assay of 6 metres at 0.83% Ni and 440ppm Co, including 3 metres at 1.02% Ni from 69 metres.

This mineralisation was interpreted by LionOre as being of hydrothermal origin, potentially remobilised from the nearby dolerite dyke. Blaze interprets this as possibly related to a prospective komatiite basal contact inferred to lie immediately west of JSA066. 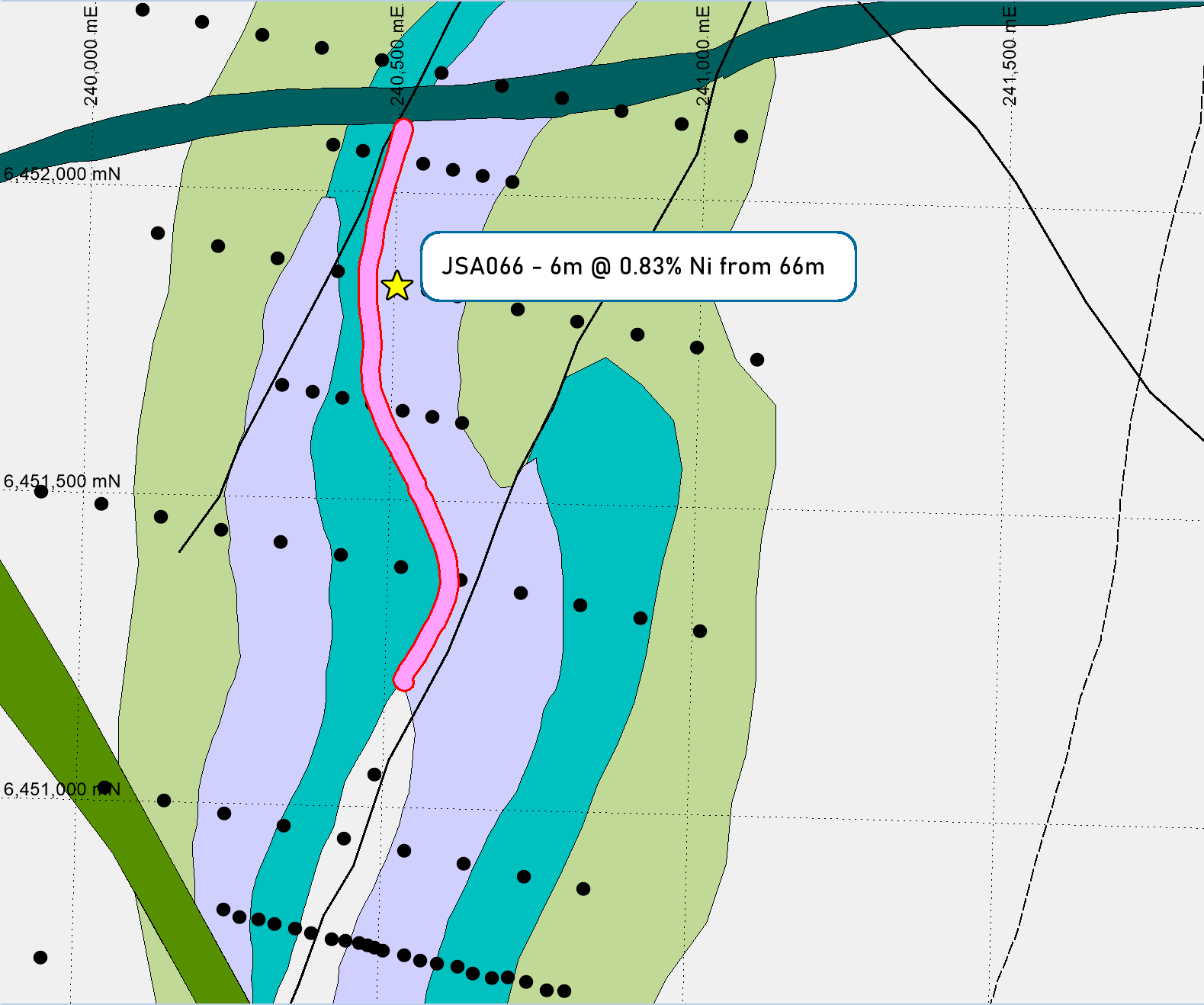 Blaze has lodged an application (ELA70/5728) over an area of 63 sub blocks (186mk2) approximately 23 kilometres east of Mukinbudin, Western Australia, in an expansion of the project generative JV.

The interpretation of the geology shows the Mukinbudin Project is most likely to have a segment of gneissic supracrustal rocks on the edge of a larger granite batholith. This gneiss sequence contains magnetic anomalies which could represent mafic or ultramafic rocks. Three magnetic anomalies were inspected by a previous operator which concluded that the MT01 anomaly was likely an intrusive unit. Please refer figure 2. 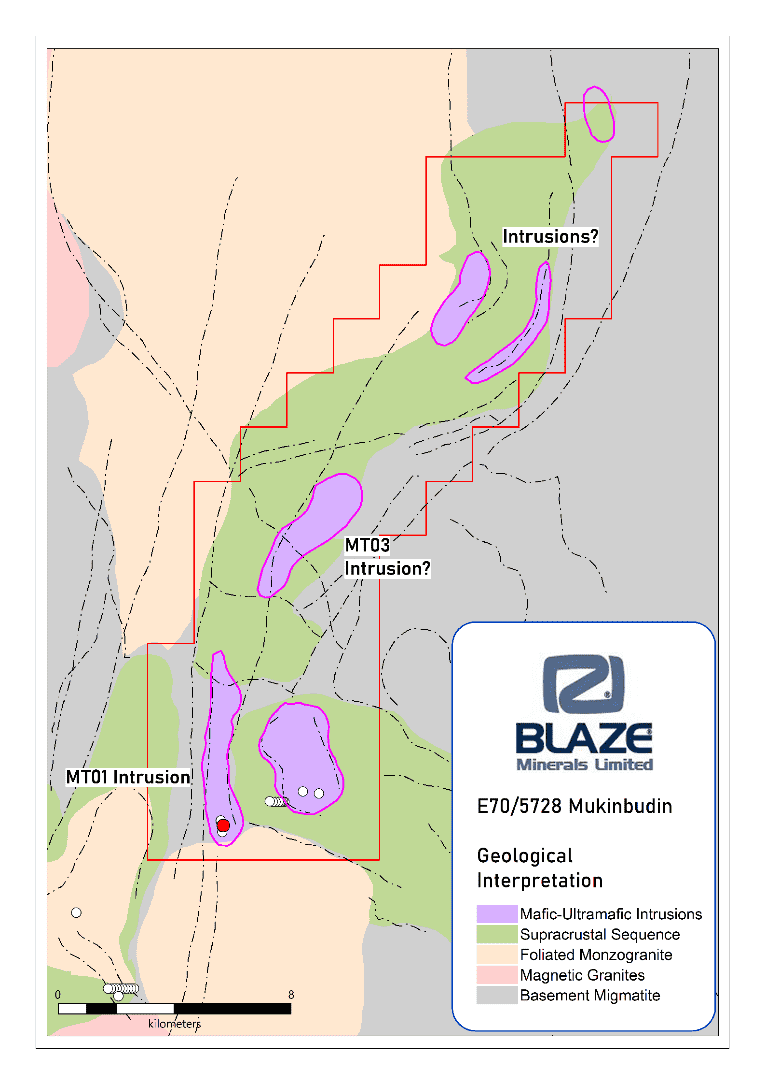 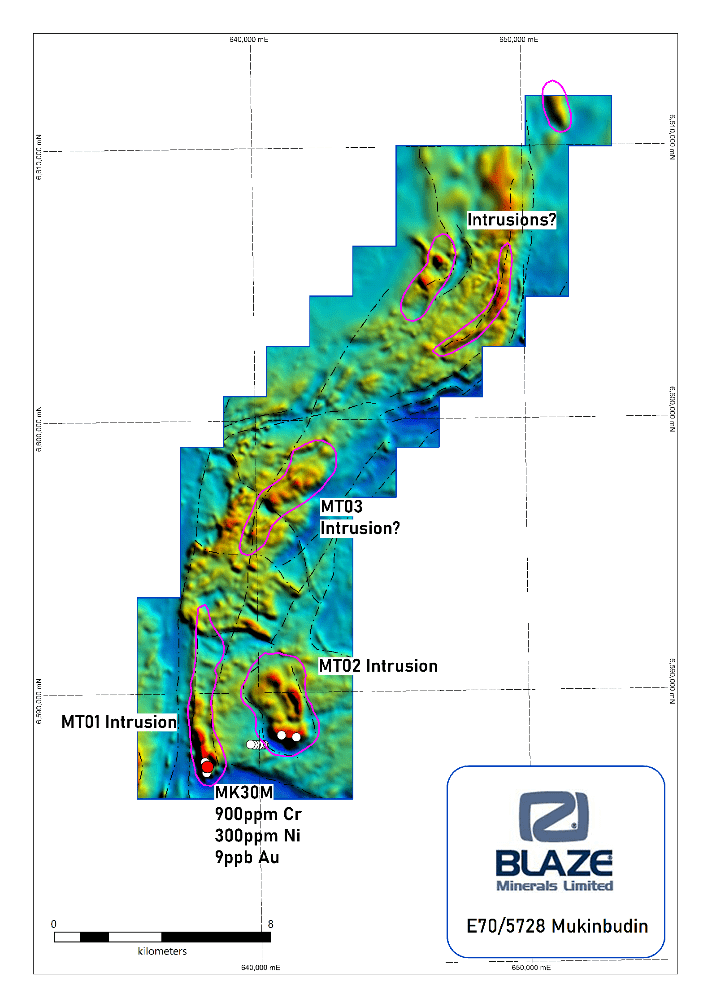 Direct evidence of mafic and ultramafic rocks on the tenure includes sampling by previous explorers that returned up to 900ppm Cr, 300ppm Ni and 9ppb Au from ‘mafic gneiss’ (Sample MT01). The high chromium content suggests that this mafic gneiss is potentially an ultramafic or high-MgO rock.

The company will progress the project to grant to be explored initially via airborne geophysics.

Get the Latest Updates from
Blaze International Limited